Anyone who knows the LM knows that at the moment he is a car fanatic.

He loves our car and will tell anyone who will listen that "we have a Honda" "in the Honda garage" it has a Honda key blah blah blah.He is very animated while talking with hands either on his hips or out stretched...

One night after we put him to bed he came running out wondering where the Honda keys were.

Now the obsession isn't just regarding our car although we wear the brunt of it.

He will tell you that  Kev's car "the work truck is a Toyota"
Kerry has a "Mitsubishi Evo but it is very noisy cause it has a turbo".
Nana and Pop have a Hyundai and when Docs picked him up the other week he walked over to the car and told Kev "this is a Hyundai the same as Nana and Pops".He was right.

At school (day care)  his teachers  also hear  about the "Honda" -not once a day or twice but ALL day .HONDA HONDA HONDA

So I thought you would like to see a picture of the object of LM obsession. 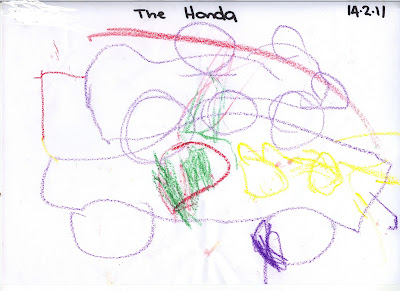 Ha ha ha  -This picture put a smile on both Kev and my face when we saw it because we knew
the story behind it.Hope it makes you smile as well.