Only about a week and a half till the baby shower.I am so excited I have already been making bits and pieces.
I have made the cake pops they are in the freezer till I need to ice them.I am halfway through the cake and I have made my nappy tricycle (will post that later) So I decided to do a sweet table in blue and whites as a focal point for the shower....

Great idea but ......
Blue and white lollies ,do you know how hard it is to find blue lollies????

Well let me tell you it is hard.

So off I went on the search for blue lollies.

What a hard time I had....I managed to get some blue Hersey's Kisses on line saying "It's a boy" some blue smarties and some blue lollipops.Then I found some pretty blue and white swirl lollipops they look so cute.

I also saw blue jelly beans so I will get them on the weekend. I decided to bring in white marshmallows and white mini mints and also silver Hersey's kisses to make the table look fuller.

When we were at mums I picked up 3 beautiful jars so just have to get a couple more and everything will be done for the sweet table.

Do you have any suggestions for a boys sweet table? 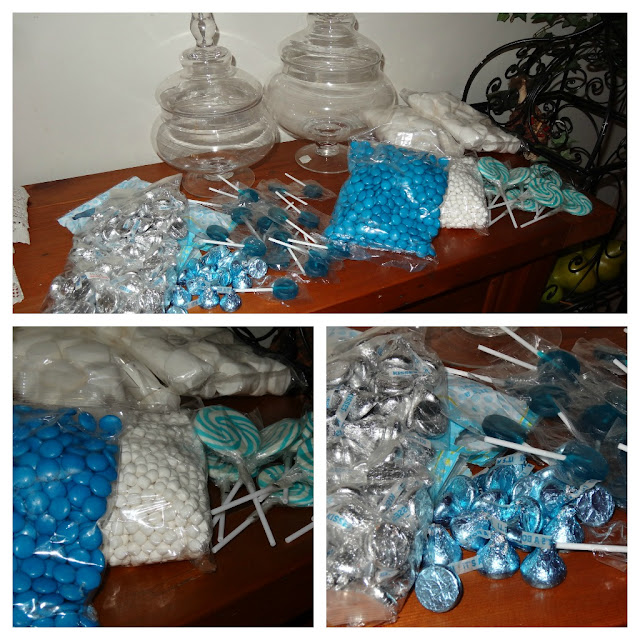 They look good don't they.I also got little blue and white bags so people can take some home. Now I just have to get some mini scoops or tongs then I have got my sweet table done.I also found a lady who makes macaroons so I ordered some blue and white ones they should look good on the table.
Apart from the cake pops I am making I will also have some vanilla cupcakes and I am going to try making some buscuits and icing them (better cross your fingers because I have never made them before.)
So I think if it all goes to plan it should look really .I have a few special bits I am going to put on the table but I will show you that when I post about the shower.Now I am off to the kitchen to finish that cake....